BASEL, Switzerland — Strapped into a cockpit-style seat, eyes peering through heavy black goggles, you can almost feel the G-force as you hurtle down the bobsled run, seat rattling and shoulders slamming as you tilt through violent twists and turns.

As soon as you catch your breath, you’re on to the next near-death experience, plunging through deepest outer space, feeling your stomach muscles tighten as you tip into a 90-degree abyss.

The ride may have been a virtual reality promotion for Samsung’s Gear smartwatches at the 100th anniversary of the giant Baselworld watch fair, which closes Thursday, but it was not a bad metaphor for the watch industry in general of late. 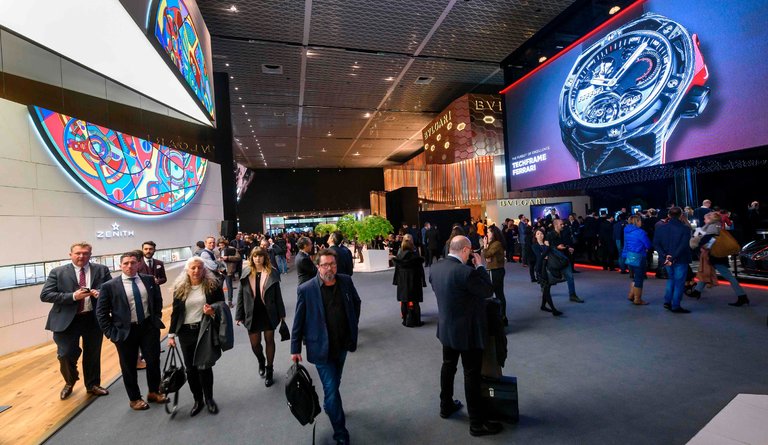 At Baselworld, the watch industry’s biggest fair, there was some uncommon talk about “value” this year.CreditFabrice Coffrini/Agence France-Presse — Getty Images

Since the 2008-9 economic meltdown, the watch industry has soared to heady highs (thanks, China) and hit pockets of turbulence (thanks, China), with numerous unforeseen detours along the way. While the wild ride is anything but over, the titans of timepieces did their best to stave off motion sickness and enjoy the biggest, brassiest watch show on earth. 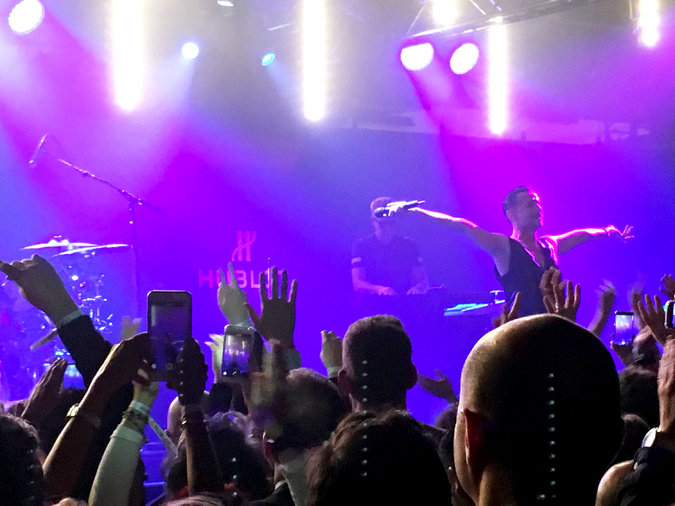 For one magical week each year, the Champagne flows and the celebrities pose as the watch industry makes its pilgrimage to northern Switzerland to revel in its own horological brand of spring fever.

Baselworld, for those who don’t know a tourbillon from a perpetual calendar, is the watch industry’s equivalent of the Olympics — eight days of fierce competition mixed with globally themed pageantry.

More than 100,000 nattily-attired watch lovers, retailers and journalists (yes, even the journalists dress up) representing more than 100 countries stroll a shopping mall-size exhibition hall to check out the latest glimmering wares from hundreds of brands in lavishly appointed booths (that is, “booths,” since some could double as upscale boutique hotels outfitted with Ginza-worthy lounges).

Baselworld, in other words, is an extraterrestrial setting where a $3,000 timepiece actually passes for entry-level and recession seems like a concern for beings from another planet. Typically, that is. 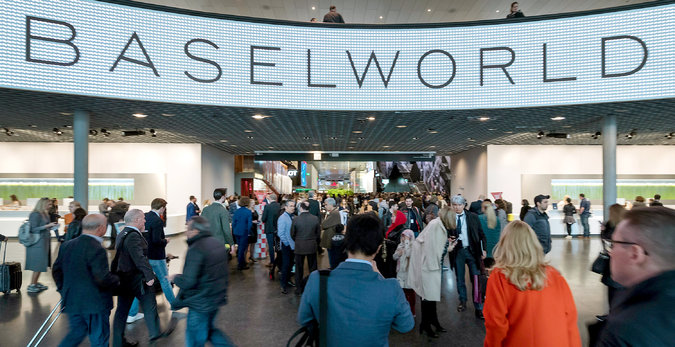 About 150,000 watch lovers, retailers and journalists checked out the latest from luxury brands.CreditGeorgios Kefalas/European Pressphoto Agency

“We’re looking now at year three of a downturn for Swiss exports,” said Joe Thompson, the editor of WatchTime magazine and a prominent industry analyst.

The avuncular editor, a dead ringer for Alan Alda, rattled off challenges that have shaken the industry: a plunge in oil prices that shook demand in Russia and the Middle East; a crackdown on the age-old practice of, ahem, “gifting” among Chinese businessmen and government officials; financial crises in the eurozone; “Brexit.”

Even America has been a cipher. Despite stock market highs and a new president who promised huge tax cuts to the wealthy (a.k.a., the buyers of five- and six-figure wristwatches), Swiss watch exports to the United States tumbled 26 percent in February, compared with a year ago, according to the Federation of the Swiss Watch Industry.

“There is great uncertainty here,” Mr. Thompson said, and he should know, having covered the fair since the late 1970s. 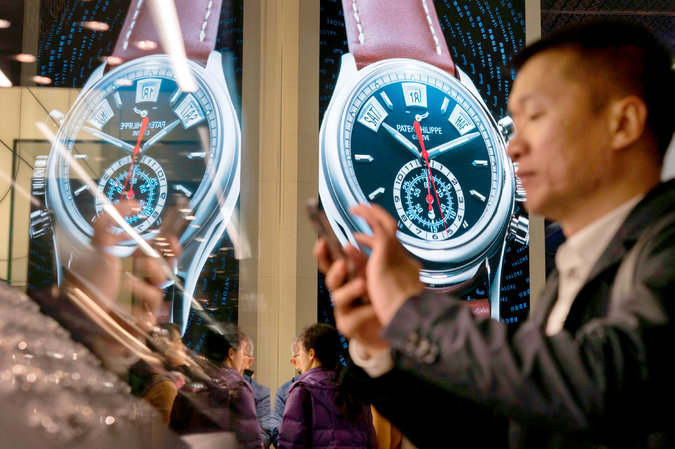 A visitor photographed a watch at the stand of the Swiss watchmaker Patek Philippe.CreditFabrice Coffrini/Agence France-Presse — Getty Images

He was not the only industry sage to detect a more muted tone.

“The crowds are thinner, the watches less daring and expensive, the egos firmly in check,” said Benjamin Clymer, the founder of the influential watch site Hodinkee, who was enjoying cocktails — to the extent anyone actually “enjoys” a $28 cocktail — with colleagues at the Les Trois Rois hotel on the banks of the Rhine on Friday night.

In a year when a number of familiar brands including Girard-Perregaux, Bremont, Ulysse Nardin and Shinola made other plans, many brands that did turn out emphasized bang for the buck, which is a big change from years past.

Zenith, for instance, which is undergoing a makeover by Jean-Claude Biver, the president of the LVMH watch division and one of the industry’s noted turnaround artists, trumpeted “aggressive” price cuts in its product presentations. The Pilot Type 20 Extra Special model, for example, was slashed to $5,700, from $7,100 (which is not exactly cheap, granted).

“But,” he added, “trying to assert a rational argument to a watch collector about quality and value is wasted breath. The halls of Baselworld are the last place on earth where ‘value’ has meaning.”

Even so, fairgoers did not seem willing to let a little belt-tightening spoil the party. As usual, the giants of the industry held lavish events.

Aristocratic Rolex served fine Bordeaux and goat cheese at the Reithalle Wenkenhof, the 18th-century estate where the tennis champion Roger Federer, a Basel native, happened to get married in 2009.

Populist Seiko, celebrating its premium Grand Seiko line, showcased the vocal stylings of its chief executive, Shinji Hattori, who took the stage at the Radisson Blu to belt out “Rock Around the Clock” and “Diana” in an Elvis-worthy croon. 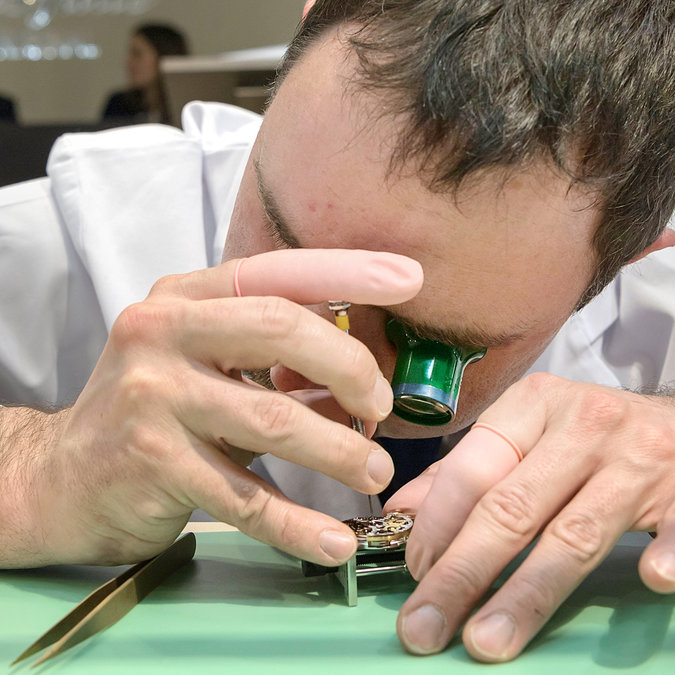 A watchmaker at work at the Glashuette booth. CreditGeorgios Kefalas/European Pressphoto Agency

Swashbuckling Hublot flew in Depeche Mode, currently in the midst of what seems the 14th comeback of its 37-year history, as a surprise guest to pound out hits like “Personal Jesus” at a lavish dinner with Ferrari (proceeds from the latest Big Bang Unico Depeche Mode, a brawny watch with menacing black studs, benefit charity: water, which promotes clean water in the developing world).

While the big brands dominate the scene at Baselworld, up-and-comers also flock to town looking to make a mark.

Bradley Price, who runs Autodromo, a cultish Brooklyn brand that makes sleek, retro-tinged racing-style watches, made his first trek to Baselworld. Unable to justify the expense of a formal presentation space, Mr. Price, 36, ended up taking a meeting with one potential retailer using the top of a recycling bin as a table.

“The customer joked that Baselworld might start charging 10 grand to use these as ‘podium-size booths,’” Mr. Price said.

Another young watchmaker who turned up at the Les Trois Rois on Friday night was Michael Wilson, who runs the coolly minimalist brand Niall in Kansas City, Mo.

That night’s jaw-dropping cocktail tab might have represented “a significant line item” on his budget, Mr. Wilson said. But the relationships he forged were possible only at Baselworld.